... if you could click on that button and be taken to a secure virtual voting booth?

The fact that you cannot do that borders on outrageous. The most technologically advanced country on earth is lagging behind in establishing a secure system for online voting. No better way to ensure that every vote indeed matters, other than doing it from wherever you happen to be. We may have to still provide physical locations for those who do not have Internet access, but that is a much smaller issue. The technology for online voting is there of course, but the political will is not. It looks politically more exciting and profitable to engage instead in endless wars about registration and access (in-person or by snail mail) to the ballot box. 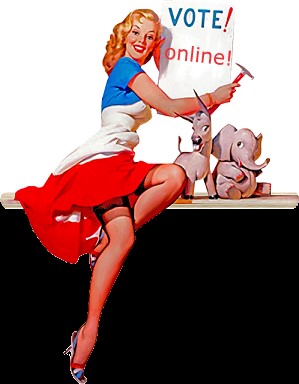 Secure online voting systems are in various stages of use in other countries. I write about this issue at length and in a wider context in the article Identity and Trust on the aibluedot site. A unified view of identity and trust in that identity is needed not just for voting but for access to governmental services (like Social Security), banking services, credit bureaus, and so on. The plague of identity theft, which affects the most vulnerable among us, does not have to go on. {[🙂 I don't want to bell the cat, but time will come when (assuming we don't blow ourselves up until then), as you push that Vote button, your digital twin in cyberspace, who will know you better than you do, will fill those ballots for you. 🙃]}